When it Comes to Orthopedic Medicine, Sometimes it’s Déjà vu All Over Again 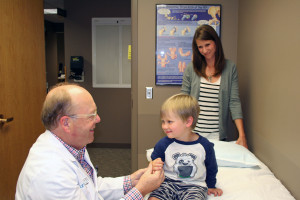 One acorn fell from the tree right into the arms of the orthopedic surgeon who had treated his mother years earlier. That happened when three-year old Oliver Schock stood up on a slide in his back yard, tumbled off, broke two bones in his right arm, and landed in the office of Walter Carlson, MD.

That acorn didn’t fall far from the tree. Years earlier, his mom, Callie, ended up in Dr. Carlson’s office, although in a less dramatic fashion.

Callie Shock, then Callie Fritz, was just five when she first saw Dr. Carlson after a routine school screening had identified that she might have a curvature of the spine known as scoliosis. Specialists confirmed the diagnosis and Callie’s parents sought out Dr. Carlson.

“He was THE name,” said Callie, remembering the advice she and her family had gotten. “As soon as it was anything to do with scoliosis or major surgery, he was THE name, THE expert.”

Once in the care of Dr. Carlson, Callie began treatments, continued with school and continued playing softball and basketball. But the treatments weren’t working. Callie was developing a hump and she was headed toward a crossroads: a body brace or surgery. It was an important decision. “My grandmother had scoliosis,” said Callie, “and she ended up crippled.”

A fate that could have awaited Callie.

The whole idea of surgery sounded scary. But, after some soul searching, Callie’s parents decided on surgery. Spinal fusion, the surgery Callie needed, was not a common surgery and Dr. Carlson was the only one in Sioux Falls at the time who had the expertise to perform the procedure.

“I was specially trained to do that,” said Dr. Carlson, who has a Fellowship in Pediatric Orthopedic and Scoliosis from the Scottish Rite Hospital.

Good thing, too, because it is a complicated surgery. “Dr. Carlson restructured my spine,” said Callie, “He put in a metal rod and braced it up and down with smaller horizontal rods and fused several vertebrae in place.”

And the results? “It changed my life for the better,” said Callie. “I was immediately 2 inches taller.” Which was a nice side benefit for Callie, now 5’9”, who played center on the basketball team. “Dr. Carlson just knew what he was doing,” said Callie. “He has great knowledge in a very complicated field.”

Callie received ongoing care from Dr. Carlson and he eventually removed the rods. And Callie moved on with her life. She completed her undergraduate and graduate education, married Jered Schock, who works for Cisco Systems, taught school in Sioux Falls, served as Children’s Ministry Director at her church and had three boys, Oliver being the youngest.

After Oliver came along, Callie scaled back to substitute teaching and volunteering at her church. Which brings us to that fateful moment, last Father’s Day, when Oliver climbed his slide and took the plunge.

Since it was after hours their first stop was an acute care clinic where Jered and Callie were told that they would need an orthopedic surgeon. Callie wanted to go to the Orthopedic Institute where Dr. Carlson now practices.

The Schock’s chose Dr. Carlson because, once again, he had advanced training in pediatric orthopedics. And as for the Orthopedic Institute, Oliver loves it. “My son loves going there because he loves the toys,” said Callie. “In fact, the nurse brought toys back to the exam room which just delighted Oliver.”

But most of all Callie is grateful to Dr. Carlson. “I went from sleeping on the floor on a cutting board to being able to function and go through life mostly pain free,” said Callie.

And there is a side benefit all moms appreciate. “We don’t have to go to Minneapolis,” said Callie. “We have an expert right here.” 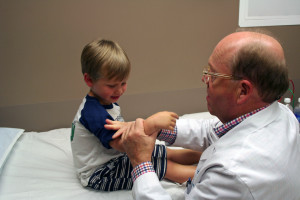