That’s what a lot of guys say when they walk into Orthopedic Institute’s walk-in clinic, OI NOW. So says Ryan Slaba who runs the clinic. Women just seem to know what’s best for their husbands, children and themselves says Slaba, a physician’s assistant, who has been running orthopedic walk-in clinics for 6 years. 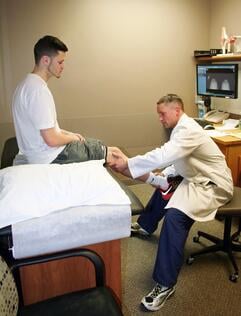 “A lot of people are very active and don’t have time to schedule an appointment,” says Slaba. “They want to get things taken care of right away.”

That’s where OI NOW shines. Men and women on the go need things taken care of now, says Slaba, without an appointment. Sprains. Strains. Fractures. Work-related injuries, low back pain,
overuse injuries, sports related injuries – anything orthopedic. When it comes to non-emergency orthopedic care, OI NOW can do it all—take an X-Ray, MRI or a CT scan, give an injection, wrap an ankle, set a bone and get people on their way. And, if necessary, OI NOW will make referrals to the broad spectrum of experienced surgeons on the OI staff.

Most of all, OI NOW patients get personalized care. “We listen,” says Slaba. “We problem solve. And we do the right thing for the patient.”

OI NOW sees just about everything and everyone, from school aged kids, to stay-at-home moms, to lion hunters—as evidenced by the ironic case of Troy Swift, electrical contractor, athlete and lion hunter. The hunt took place in New Mexico. It was a dangerous, grueling 60-hour man and dog chase and Swift bagged a large male mountain lion without a scratch. But, next day, while playing basketball, Swift went up for a dunk and on the way down twisted his knee. “Everyone on the court heard it go “POP!’” said Swift. 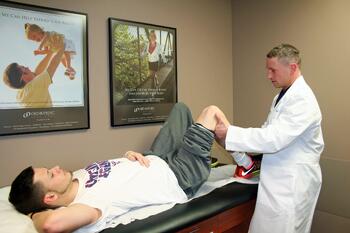 Swift’s wife, Kimberly, told him to go to OI NOW.

Slaba referred Swift to a surgeon. Michael Adler, MD, the surgeon on call for Orthopedic Institute, performed the surgical repair, and today Swift feels good, has his stability back, and is working and taking care of livestock.

Swift says he got great care from everyone. But what he liked most was “how fast they got me in.” Swift injured himself between Christmas and New Years in New Mexico and drove home. “I went into OI NOW on a Monday and had surgery on Friday of that same week,” said Swift. “They expedited me through the process.”

‹ Tell your state legislators to not change or adjust IM17 Patient Choice
Complimentary Screening Clinic for Children with Bone, Muscle or Joint Problems ›